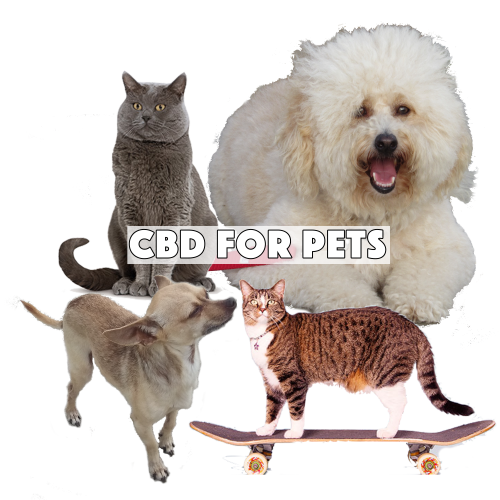 Our pets are like children to us all as well as best friends and the last thing we want to do when they are ill is give them manufactured pharmaceuticals that are known to have devastating side-effects! CBD stands for Cannabidiol and it is extremely helpful in treating pets as they enter the middle to latter parts of their lives!

CBD cannot get your dog “high” because it is scientifically isolated from industrial hemp which has little to no THC, the active cannabinoid that produces the “high”.  Veterinarians are not allowed to prescribe CBD products for animals because it is not FDA approved and still remains a schedule 1 drug.  Marijuana advocates have petitioned the Drug Enforcement Administration to consider rescheduling marijuana, which has been unsuccessful thus far.

Pet owners testimonials backed by news stories and individual research has proven that CBD is a “miracle” when it comes to treating anything from digestion problems to seizures to nausea!

The bottom line is this: the American Medical Association (AMA) has been urging the Federal Government to reschedule marijuana. Legalization would be helpful to conduct veterinary research studies, and to develop cannabinoid-based formulations. Like the AMA, the AVMA has called veterinarians for scientific debate on this issue, which is noteworthy.

Here are some favorable testimonials that support veterinary cannabinoid use, even on the AVMA website. The AVMA website has published testimonials of pet owners who endorsed cannabis use and who claim its use has dramatically improved the quality of life and mobility in animals that were previously unable to ambulate. More over, cannabis has improved appetite and reduced the reliance on conventional medications, particularly in animals that are intolerant to those drugs.

How a dogs body reacts to CBD

The available pharmacological data on animals is scarce. Unlike humans, dogs metabolize cannabinoids in a different way. In dogs, 2-AG and anandamide are the primary messenger cannabinoids. These chemicals activate CB1 and CB2 receptors in the brain and other regions, respectively. Being an agonist to these receptors, CBD weakly binds to these receptors for a longer duration, and evokes long-lasting therapeutic response without causing toxic effects.

After intravenous infusion, CBD distribution was reported to be rapid, followed by prolonged elimination with a terminal half-life of 9 hours. The total body clearance may take up to about 17 hours after administration. The oral bioavailability appears to be low (13-19%), which may be due to the first pass effect in the liver. With low bioavailability, the risk of developing systemic toxicity may be low in dogs.

Once the effects wane, the dog’s liver metabolizes the cannabidiol and eliminate it via the urine or bile in a sustained and safe manner. This might be the possible reason for achieving immediate but prolonged therapeutic response in CBD-treated animals.

We hope you will consider trying hemp based CBD for helping your pets through any injuries or illnesses!

ORDER CBD TREATS or CBD OIL FOR YOUR PETS NOW

cannabidiol and pets, cbd, hemp cbd, hemp oil, pets
Lead Scientist
Recommended Posts
PotluckExpo.com - All Rights Reserved © 2015-2020 FOOD AND DRUG ADMINISTRATION (FDA) DISCLOSURE These statements have not been evaluated by the FDA and are not intended to diagnose, treat or cure any disease. Always check with your physician before using new products. Aside from 0.3% or less THC, Cannabinoids are naturally-occurring constituent’s of the industrial hemp plant and hemp oil. All of the cannabinoids in our products, including our CBD, CBG, CBC, CBN are natural constituents of industrial hemp and and are in compliance with the Farm Bill of 2019. PotluckExpo.com does not sell or distribute any products that are in violation of the United States Controlled Substances Act (US CSA). The company does sell and distribute industrial hemp-based products. Please note that some of the products listed for sale on this website may be shipped by third-party suppliers. PotluckExpo.com is not responsible for the unsuccessful delivery of any international shipment (customs seizure, lost shipment, etc.)
0
Save 20% on your first order!
Subscribe below for your Potluck Expo coupon code and future sales offers
Subscribe
Unsubscribe anytime. We will never share your information with 3rd parties.